Color World’s Paint the Town Proud Honoree for May 2022: 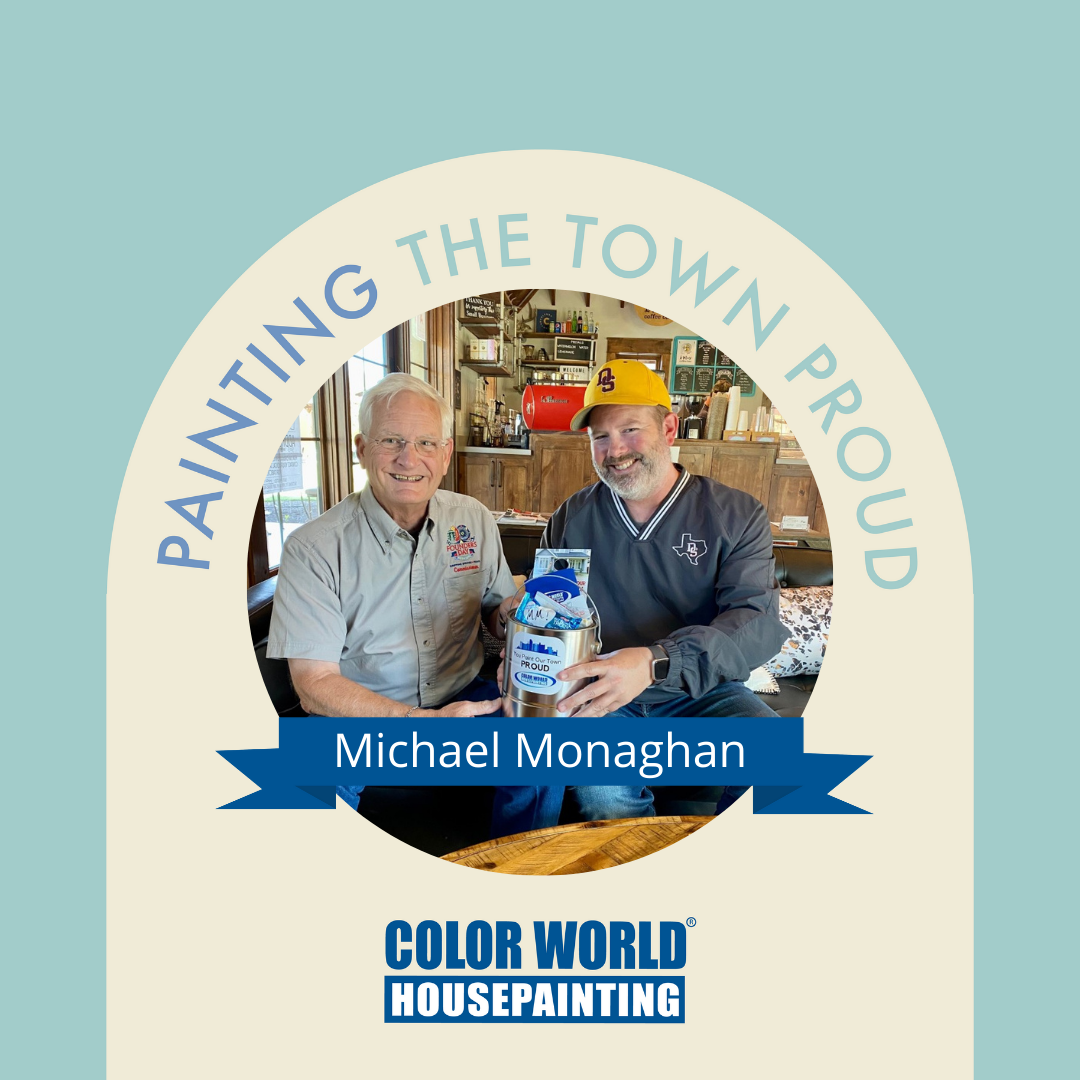 If Michael Monaghan was a professional athlete, his trading card stats would read a little like this:

As a Founders Day Festival Commissioner for the City of Dripping Springs, he has achieved all-star status. He gives tirelessly to his town, his church, and his family – without most of us ever knowing of his quiet but stellar works.

Michael serves as a representative of St. Martin de Porres, one of the three founding organizations for Founders. He coordinates the 209 vendor booths for the weekend which is a job that begins in the fall each year.

We asked him how he got involved and he quickly replied: “When Father Charlie says he has a project for you, you do it,” Mike said of his former priest from 8 years ago. “You don’t ask questions; you take it on.”

And he did with open arms and hasn’t looked back in 8 years. Michael described the process: “I start contacting the previous year’s vendors in late fall if they want a space for the coming year, and then we open the applications online. It takes about three months to get everyone assigned a booth space and ensure that there are not any conflicts in the lineup,” Michael added. He also coordinates the vendors’ electrical needs with the city staff to ensure there is enough power for all who need it.

Once he creates the detailed vendor map, the communication process starts with extra attention for the newcomers who “don’t know the drill” like those who have been coming for 33 years. And the traffic flow plan for load in of 209 booths on Saturday morning before 10 a.m. and the exit plan for Sunday night are something spectacular to see.

Michael outlines these duties like it’s routine, but it’s far from easy. And his soft spoken and straight-forward demeanor instill confidence in all who may be a bit flustered with the event’s magnitude.

“Michael is everywhere during founders – from one end of the vendor market to the other in lightning speed. He is answering questions, helping vendors get set up, working with area merchants and problem solving on the move,” said Brenda Medcalf, chair, Founders Day Festival Commission.

Not only did Michael put in the 47 miles of steps, but they were also FAST steps! “It’s impossible to fully understand all that he does in his role until you see for yourself from inside the commission,” added Dee Marsh, fellow commissioner, first term. “And I never saw him on a golf cart the entire weekend either, but every time I looked up, he was there.”

We are honored to recognize Michael Monaghan -- MVP to us all in Dripping Springs -- for his gifts of service to our community as well as all the visitors, merchants and vendors who come to Founders Day Festival each year. Thank you for painting our town proud, Michael!

Founders Day Festival is the annual celebration of Dripping Springs’ founding families held each April. The most recent event was the 33rd one, with a grand parade, Thomas Carnival, live music, 130 cookoff teams, and an estimated 110,000 visitors attending the three-day event. Learn more: foundersdayfestival.com